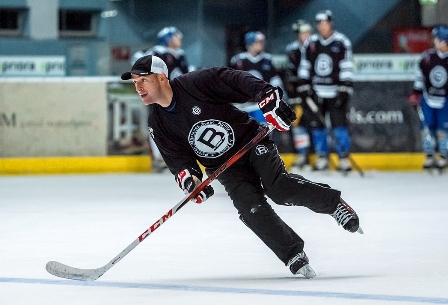 Besa has personally trained over 4,000 NHL, AHL, Minor Pro,   Major Junior, Junior, High School, and  A-AAA Youth Players   from all over the world during his career as a professional hockey   skating coach.

A native of Tbilisi, Georgia, Russia, Besa began   skating at the age  of five. He had the good fortune of being introduced to hockey and figure skating   under the intense and rigorous programs of the  former Soviet Union athletic programs, experiences which helped him to develop into a world class athlete.

In 1990 Besa graduated from the Georgian University with a Bachelor of Arts in Physical Culture. In 1997 Besa came to the United States and since then, he started developing and perfecting his own hockey skating teaching system working with individual hockey players and organizations.

2005-2010 Besa was hired to provide team and one on one training for the Pittsburgh Penguins and other professional hockey organizations and their affiliated players. Besa has helped to hone the skills of professional hockey players such as Evgeni Malkin (NHL), Sergei Gonchar (NHL), Konstantin Koltsov (Russian Super League), Colby Armstrong (NHL), Andrei Zubarev (KHL) and numerous others. He tailors his work to individual players and teams, working to address weaknesses and turn them into strengths.
Besides working with Pro players, Besa prides himself in working with the next generation of hockey players.

From 2004-2010 Besa was the power skating coach for Wilkes-Barre/Scranton Junior Knights, that went on to win the 2011 National Title. Besa trains young players from all over the world. He constantly improves, innovates and develops new ways to help each and every player learn the proper techniques and gain the endurance and strength it takes to stand out during a hockey game. In 2011 Besa relocated to the Boston area. 2011-2013 he worked as a consultant for the Boston Bruins organization and their elite prospects and affiliates as well as an exclusive Power Skating Coach for the Boston Junior Eagles Youth Hockey.
2014-2019 Besa works as hockey skating coach for Davos Hockey Club, Switzerland (SNL) Besa is always is on the mission to bring the B.E.S.A. hockey skating training system all around the world. Besa, the players and coaches/representatives are working on a regular basis at B.E.S.A Hockey Master Classes and camps in 6 countries in North America and Europe.

Andrey​ ​Romanov is a 200-hour certified Besa Hockey Skating Specialist and has been working with Besa​ ​Hockey​ ​since 2016. His energy and enthusiasm combined with his extensive hockey playing experience makes him an asset to Besa Hockey for helping players develop the necessary game combat skills taught through the Besa Hockey Skating System.

Andrey is was born and raised in Moscow, Russia. He started playing hockey at the age of four and was groomed in one of the most famous hockey clubs CSKA - Moscow. At CSKA he was trained by many specialists from all over the world. One of those specialists was Besa Tsintsadze. Besa had such an impact on him that he decided to pursue professional skills coaching after hisamateur​ ​hockey career.

Andrey has​ ​been training with Besa as a student since 2009 and since 2016 as a professional skating coach.​ ​He is currently based in Kazan, Russia at the Ak Bars National Hockey Academy, and is a Certified Skating Specialist for Besa Hockey Russia and Besa Hockey Europe.​ ​Coach Romanov speaks Russian, English, and German.

Randy Chen was born and raised in Etobicoke Ontario and began playing hockey at the age of 5 years old. Randy has been a student of Besa Hockey since 2006 and played his minor hockey career in the GTHL & OMHA, through to Jr. C (PJHL) and AP’d Jr. A in the OJHL. The last 4 years of training as a assistant has provided Randy with the knowledge and opportunity to help players reach their potential and get to the next level.

Randy has recently completed his undergraduate degree at Wilfrid Laurier University and has been a student of Besa Hockey since 2006. Randy has been training alongside Besa as an assistant since 2018 and in August of 2022 he completed the 200-hour Certification Prorgram and became certified Besa Hockey Skating Disciple in Canada.

Elene Gedevanishvili is a 3 time Olympian (2006 Torino, 2010 Vancouver, and 2014 Sochi.) She was born in Tbilisi, Georgia and began skating at the same Skating facility as Besa, at 3 years old. Since then Besa had been Elene’s role model, as he paved the way for Georgian youth in figure skating. At 9 years old she won the Georgian national championship, moved to Moscow and begun training there under Tatiana Tarasova at CSKA Moscow for 9 years. She qualified for her first Olympic Games at 16 for the 2006 Torino games,(where she placed in top 10) bringing Republic of Georgia highest result achieved in the history of winter sports at the Olympic Games. She has won two Bronze Medals at the European Championships in 2010, and 2012.

She retired from competition in 2015 and enrolled into Plymouth State University, which she graduated in 2019 with the degree in Exercise Psychology.

After completing her Bachelors degree she started coaching full time as a skating technique instructor at the Elite Hockey Training facility, Cutting Edge Ice Academy, in Elmwood Park, NJ, where she had chance to assist and learn from elite coaches about the game of hockey.

Cutting Edge also happens to be one of the destinations Besa visits for his camps, and over the past 4 years Elene has had the opportunity to assist and learn from Besa in all of his training camps at the Cutting Edge as well as Besa Hockey Camps in Long Island. At the moment she is well on the way to complete her 200 hour certification and become a Besa Hockey Disciple.

With this working relationship, and over the past years, Elene has used the knowledge passed down from Besa, and coached a number of her own students from B to AAA level, worked with many Junior and NCAA players. Elene also has been hosting her own weekly clinics as well as camp at her Home Rink Cutting Edge Ice Academy.

Jason Zaleski is from Scranton,Pennsylvania. He played his youth career with the WBS Jr Knights and trained with Besa from 8-13 years old. Later on he moved on to play at high levels of amateur hockey:

-Junior WBS Knights Atlantic Junior Hockey League (AJHL) and led team to win AJHL championship;
-Junior hockey with Trenton Golden hawks OJHL (Canada) one of the premier programs in the OJHL;
-College hockey at Buffalo State SUNY Division 3 where he won rookie of the year and led the team in points;
-College hockey at University of Arizona Wildcats and went on to win the Cactus Cup which signifies supremacy in Arizona college hockey.

Coach Jason graduated University of Arizona with a degree in Business Management. He loves to travel (and is a great cook:)

Jason started working assisting Besa with youth camps in 2018 and now is working on completing his 200 hour certification to become a Besa Hockey Disciple.

Now screening applicants in a search for the next star to be trained and certified as a Besa Hockey Skating Specialist.
This specialist will be certified to use the B.E.S.A. Skating System and educate committed hockey players, coaches, and organizations around the world.
Part-time opportunity to start with full-time potential.

Candidates must be able to demonstrate skating movements at the highest level and be in peak physical condition
U.S. Citizenship, U.S. Residency, or a visa permitting candidate to work in the USA
Strong recommendations from previous employers, coaches, or clients
Strong communication skills are preferred

Candidates should send cover letter, resume, and demonstration video of skating ability including at least 5 drills to This email address is being protected from spambots. You need JavaScript enabled to view it.